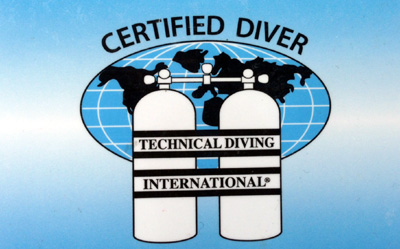 With offices in more than 100 countries, the present day situation has exceeded the original vision of the founders, who made their plans on a table napkin, seated at a kitchen table.
The original concept came from the idea that there was a need for what the industry now calls Technical Scuba Diving. The founders filled that need by setting up the first group agency, Technical Diving International in 1994.
Technical Diving International was one of the first agencies of the kind. It’s objective was to supply material for training and teaching in specific areas of Scuba Diving, ranging from Nitrox to Rebreather in a Closed Circuit to diving in obstructed areas, like in caves and to wrecks. TDI also supplies training for the preparation of gas mixes for dives of up to 100 metres depth.
Some important elements have characterized the development of TDI as well as making it a pioneer in the way many scuba divers learn to dive today. Above all, TDI is the vanguard of the movement which has convinced the scuba diving industry to accept technical diving activity.
In the beginning, technical scuba diving planning was considered to be out of the reach of the average diver and it was felt that such activity would be too risky for non professionals.
The factors were compensated by the TDI through an extensive training process with seminars, publications and training material provided by the TDI itself. The average scuba diver understood that the risks involved in technical diving could be brought to n acceptable level.
Today, the industry has evolved to include not only technical diving but as far as the point where the Nitrox course is the most popular specialization course in the world.
Another key event in TDI history is that it was the first agency to promote the use of Rebreather a semi closed circuit, among recreational divers, thus causing the setting up of a whole new sector of the underwater industry which many believe will prevent the decline of the industry in the future.
In 1998, TDI was unable to stall the setting up of a recreational division of itself any longer and so, Scuba Diving International (SDI) was born.
The principal reason for this expansion was that Scuba instructors felt that an agency was needed to answer requests from recreational instructors who believed that suitable programmes should be created for the way that today’s divers want to learn.
Like TDI, SDI also stood out from existing training agencies. It was the first to require the use of the personal underwater computer right from the first dive in the sea.
This new standard was decided because computers were used routinely by all professional divers so that the dives became safer and research showed that the average diver forgot to consult tables soon after completing their course.
Along with the progress made, the increased trustworthiness of underwater computers made them a safe alternative to dive tables. SDI was aware of this. Today, knowledge of the dive tables is considered an optional part of the curriculum for a learner diver.
In 2004, after 10 years of agency development, the founders of SDI/TDI/ERDI sold their shares to a group of investors who quickly widened the range of services of the company. The most immediate changes included joining the RSTC (Recreational Scuba Training Council) and the European Underwater Federation (EUF), which were fundamental for approval of SDI standards in the scuba diving community. SDI was easily accepted and is today actively involved in both organizations, making the sport safer for an ever increasing number of divers.
Other changes arrived when more personel were employed and when it was decided to embrace new electronic technology to make it easier for members to do their work.
Though SDI/TDI/ERDI are considered to be the newest certification agencies in the Scuba diving industry, they are also seen as the most professional and innovative.
The SDI/TDI/ERDI history and reputation as innovators are the basis for a solid foundation in the future.